A fungus is a member of a large group of eukaryotic organisms (plants, animals, fungi). Fungi however are classified as a Kingdom of its own since their cellular structure is different from plants and animals. It includes microorganisms such as yeasts  (single celled) and molds (multicelled).

Some molds cause disease or food spoilage, others play an important role in biodegradation or in the production of various foods, beverages, antibiotics and enzymes.

Like all fungi, molds get their energy not through photosynthesis but from the organic matter in which they live. They play a major role in decomposing organic material, enabling the recycling of nutrients throughout ecosystems. Many molds also secrete mycotoxins which, together with hydrolytic enzymes, inhibit the growth of competing microorganisms.

Although molds grow on dead organic matter everywhere in nature, their presence is only visible to the unaided eye when mold colonies grow.

Many molds can begin growing at 4 °C (39 °F), the temperature within a typical refrigerator, or less. When conditions do not enable growth, molds may remain alive in a dormant state depending on the species, within a large range of temperatures before they die.

Everything that's animal or vegetable can get moldy. While living things are alive, the mold attackers can be held at bay. As soon as they are dead, molding begins. First it molds; then bacterial action sets in. This is what makes things biodegradable. It is a precious phenomenon. It does away with filth in an exquisite manner.

Molds produce some of the most toxic substances known, called mycotoxins. One small moldy fruit or vegetable can pollute a huge batch of juice, jam or other product. Although molds are alive, and can be killed by zapping, mycotoxins are not, and must be detoxified by your liver.

But because mycotoxins are so extremely poisonous, a tiny amount can incapacitate a part of the liver for days!
Aflatoxin is the most common mycotoxin.

A heavy dose of vitamin C helps the liver recover quickly. It also helps get rid of aflatoxin before it is consumed. The liver is a versatile organ. It can regenerate itself but it won't if food molds block regeneration.

Several common mold toxins inhibit the immune system, too, specifically those white blood cells that are supposed to eat and destroy viruses.

HOW TO AVOID OR REMOVE FUNGUS AND MOLDS:

See the Fungi's favorite Location or continue with this  section.

Copyright notice – Excerpts taken from "The Cure of all Diseases" written by Dr. Clark
[The generic description of fungi and molds is taken from Wikipedia, the free encyclopedia open to all and a non-profit organization.]

Fungi (singular fungus) are multicellular organisms like plants and animals.They digest their food externally, absorbing nutrient molecules into their cells. Yeast, molds and mushrooms are fungi. Fungi and bacteria are the primary decomposers of organic matter.

Everything that's animal or vegetable can get moldy. Some produce very toxic chemicals.

They produce some of the most toxic chemicals known to exist.

AFLATOXIN is one of these. It reaches the liver and simply kills portions of it. After a hefty dose the liver is weakened for a long time— possibly years. Hepatitis and cirrhosis cases always reveal Aflatoxin. Aflatoxins preceed all jaundice and block detoxification of hemoglobin in the liver so the bilirubin goes up.

The earth is so full of mold spores. The wind can carry these spores high up into trees, and even up to the stratosphere. Molds are not very choosy. They have their preference for certain plants and conditions. But the same molds can grow on many plants. This is why Aflatoxin, for instance, is found not just in your cereal, bread and pasta but in nuts, maple syrup, orange juice, vinegar, wine, etc. Where is it not? It is not in dairy products or fresh fruit and vegetables, provided you wash the outside. It is not in meat, eggs, and fish. It is not in water. It is not in carefully screened wheat that has had its discolored, shriv-eled seeds removed before using it for making bread, cereals and noodles. It is not in baked goods bought at bakeries, left open to air.

However, there is also an internal source of the production of Aflatoxin.

It is produced by ASPERGILLUS and PENICILLIUM which are also molds.

Aspergillus needs cobalt, chromium and nickel, while Penicillium needs copper. These two molds are in the liver because they have found dead parasites such as a dead Fasciolopsis Buski or Fasciola Fluke and they are devouring them. They then release Aflatoxin in the liver.

Dead parasites and decaying blood invite a special class of bacteria, Clostridium, and special classes of fungus, Aspergillus, Penicillium, and Sorghum mold. These leave their copper, chromium, cobalt, and nickel behind them each time a generation dies. They are now in oxidized metallic form. But new fungus can use them while they are toxic to our enzymes.

The Potato Ring Rot fungus produces a mycotoxin called ZEARALENONE(zear). It interferes with reproduction by causing feminization in animals. Zearalenone is detoxified by the body to benzene and finally to formic acid. Potato Ring Rot grows in the dead remains of the parasite Macracanthorhynchus, both requiring gold. You find zear on popcorn, corn chips, and brown rice and on the green and brown spots on potatoes and potato chips.
SORGHUM molds cause hemorrhaging, appetite loss, and inability to swallow. It is present in all natural sweeteners. It grows in many of our organs; it gives us tiny red "blood blisters" possibly it is responsible for strokes in the elderly.

KOJIC ACID is a mycotoxin that prevents you from detoxifying wood alcohol. This leads to pancreas damage, invites pancreatic fluke infestation, and typically results in diabetes. It is found in potato skins. It can also be found it in regular coffee.

T-2 toxin is a mold in cases of high blood pressure and kidney disease. It is present on dried peas and beans. It can be detoxified in 5 minutes by adding vitamin C to the water they are soaked in.

The scientific name for YEAST is “Saccharomyces Cerevisciae”. This is the bread and alcohol variety which is the dangerous kind in cancer, not the vaginal or mouth variety. Our immune system, white blood cells, are capable of eradicating yeast provided it isn't growing too fast . Yeast produces cancer markers called CEA and AFP. It also brings RAS which is an oncovirus. Together with Staph it does not cause pain but steals your food (blood sugar) and gives extreme fatigue, loss of appetite and weight loss.

Control requires the removal of chromium, gold, nickel and cobalt

HOW TO AVOID OR REMOVE FUNGUS AND MOLDS:

Read the section on FUNGUS AND MOLDS FOR BEGINNERS.

Continue with dyes for advanced

Watch the never seen before interview with Dr.Ing.Clark and get more Information about her.

Sign up for the Video Channel and enjoy all the benefits ! 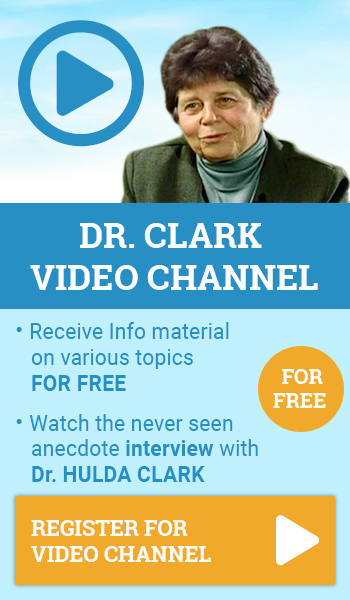